Open your mind and your soul and

experience its messages for you!

Sinister Creations of a Dark State of Mind

Mystic masks which transfer their might to the wearer and spiritual statuary to worship have been created by my dark state of mind!

Inspired by African masks and international holy and evil sculptures, I made my artworks. Each one speaks in a silent tongue and in a very personal way to every beholder!

Open your mind and your soul and experience its messages for you! If you are not afraid of your own dark subconscious, these artworks my take you on a journey in mind to the hidden places of your soul, even you, haven't known before.

So let me wish you a wonderful journey to the underground realm of your self, but be aware it may surprise you in a way, you would never have expected it! Only the elected can go on this mind trip. Maybe you are one of the elect, you will immediately know by looking at a piece, whether it looks back to you or not!

I was always fascinated by the mystic figure of “Medusa“. She is one of the Gorgons of the Greek mythology. It is said that everybody who looks into her red glowing eyes, immediately solidifies to stone. Isn't that the stuff that brings automatically interesting images to a horror fan's mind?! Especially if you are a fine artist!

I admired the paintings, sculptures, and reliefs showing the different ideas of Medusa from many artists. I wanted to see my personal Idea of her coming true and I decided to make a mask!

So here she is, my “Medusa“, made of mixed Media. The mask is wearable for theater or events! The snakes are flexible and can be new arranged if you want to. 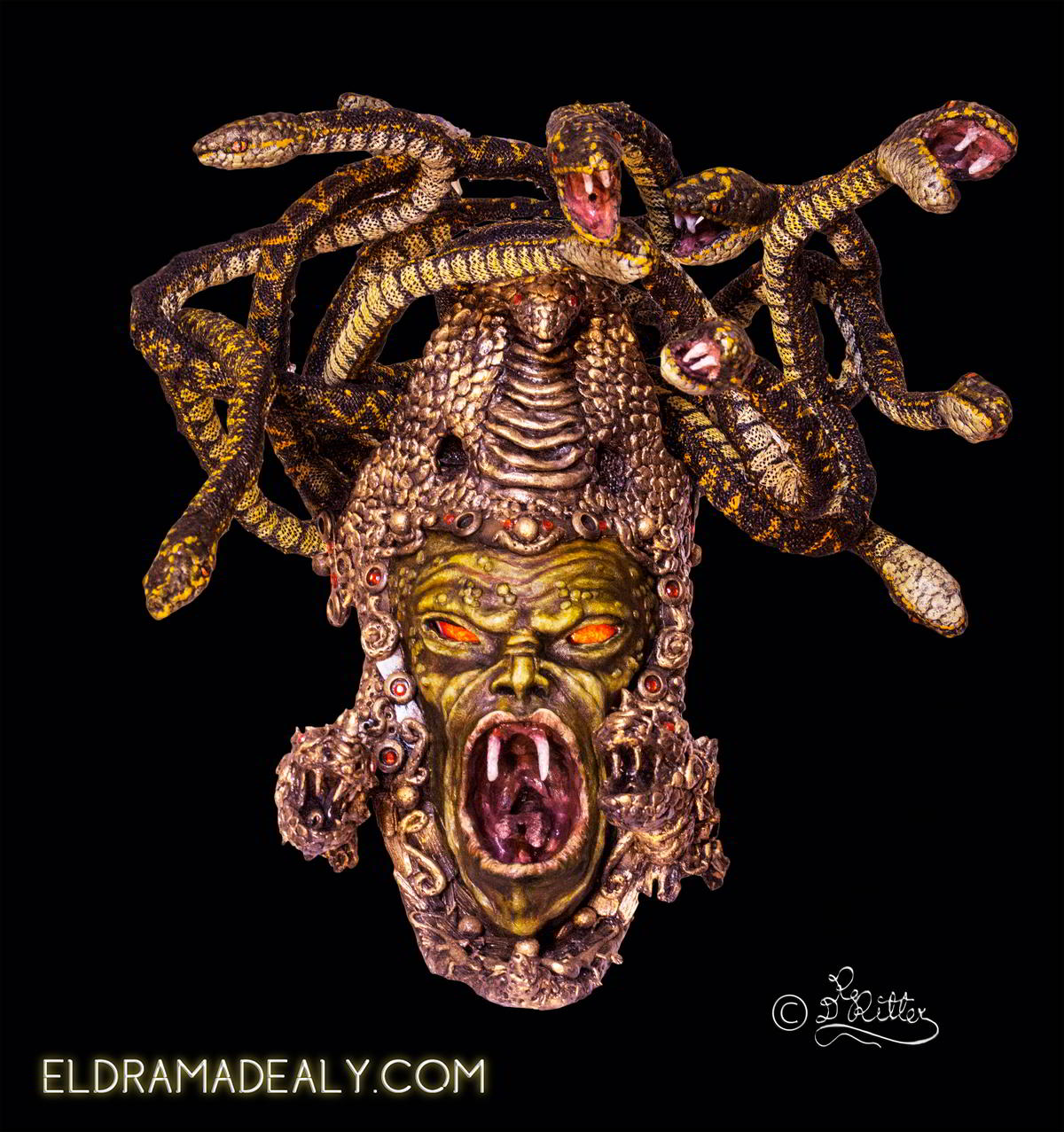 These are my African style masks, inspired by the wooden, spiritual masks of African artists. These old wooden artworks are so expressive and you never forget them when you have seen them for the first time. Many people feel frighten by such artworks, but I love this unique African style. And naturally they are impressive, because people made them to get the power of ghosts, animals and gods when they put it on!

So with these ideas in my mind I started to design my masks. They are not made of wood as originals are. I used my favorite mixed media technique. It wasn't my intention to make a typical African Mask, I just wanted to catch the impression and give it my personal touch.

I always try to do things my way! Even when I'm doing projects which are inspired by existing objects or artworks. It's something like a challenge for me, given by myself: "Put a part of your soul in it!" 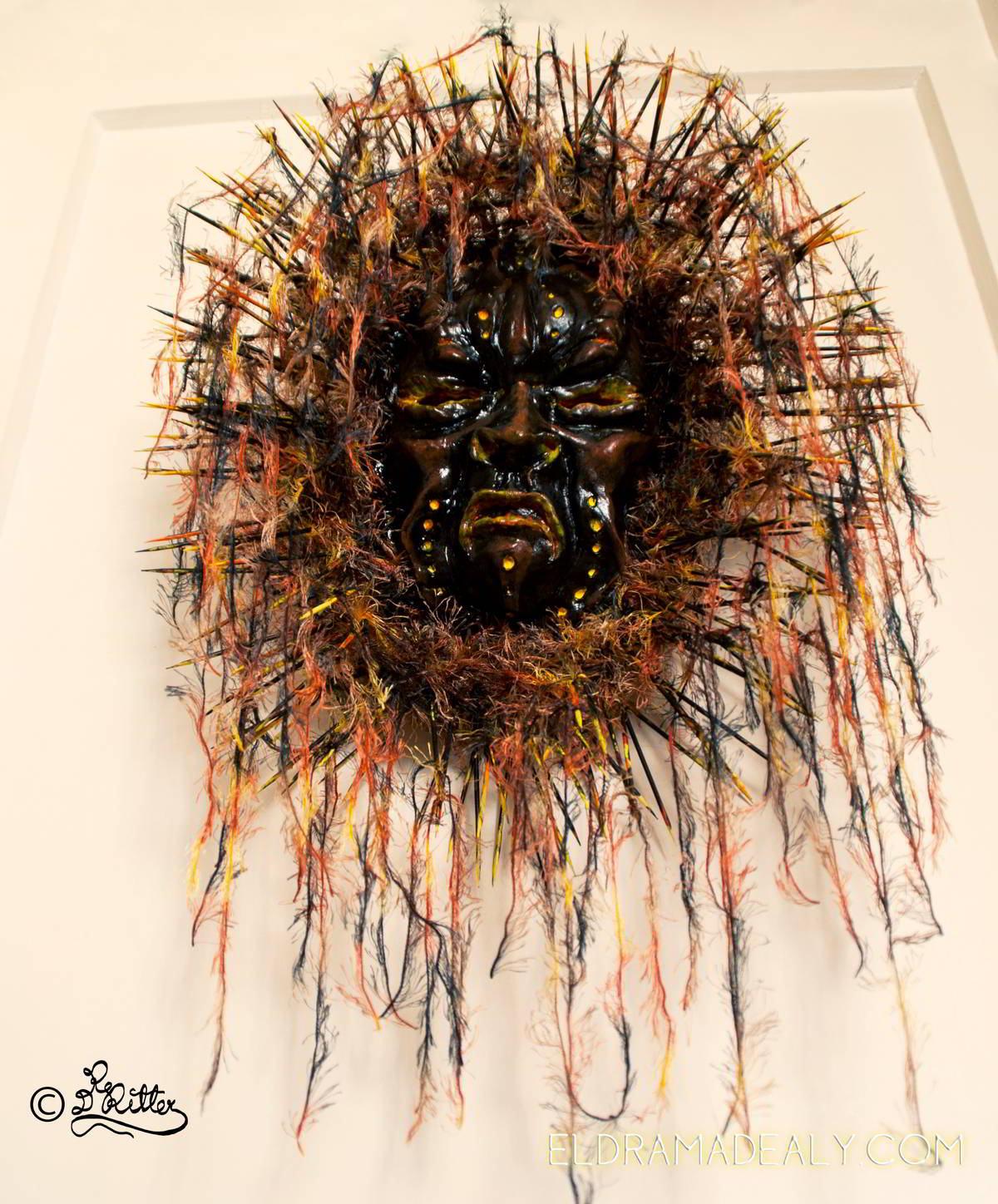 Do you know how it is, when you want to look at a website and this aggressive big advertisement windows pop up in the middle of the screen and you can't find easily the way to close it? It sits there like fat spider in its net lying in wait for her quarry!

Exactly the same way it happens when some idea pops up in your mind! You don't know where it comes from, but it is there, absolutely clear and detailed: the design for a new sculpture. This hungry Egypt child mummy, which awoke from the dead was suddenly there and I felt the strong wish to sculpt it.

This pop up ideas often happen to me. It may sound strange, but when I'm working on themes, and I'm not happy with my ideas, or better said, I miss some details to make the image ready to bring it to life, then I tell my brain to work in the back of my mind on it, and come out with it when the draft looks interesting enough to work it out. Or, from time to time, I walk down the dark stair to the cellar laboratory of my mind and take a look at the status quo of the project! If I like it, then I take it with me to the top of my board-computer called awareness and think it over.

I'm sure everybody is often working that way, but don't pay attention to that process. Or did you never sleep a night over it, before you made an important decision?

Naturally, in my case, I'm interested in Egypt art, pyramids and mummies. So, this topic is very normal to me and I'm used to deal with it. But where on earth, came this hungry child mummy from, if not out of the back of my mind?! 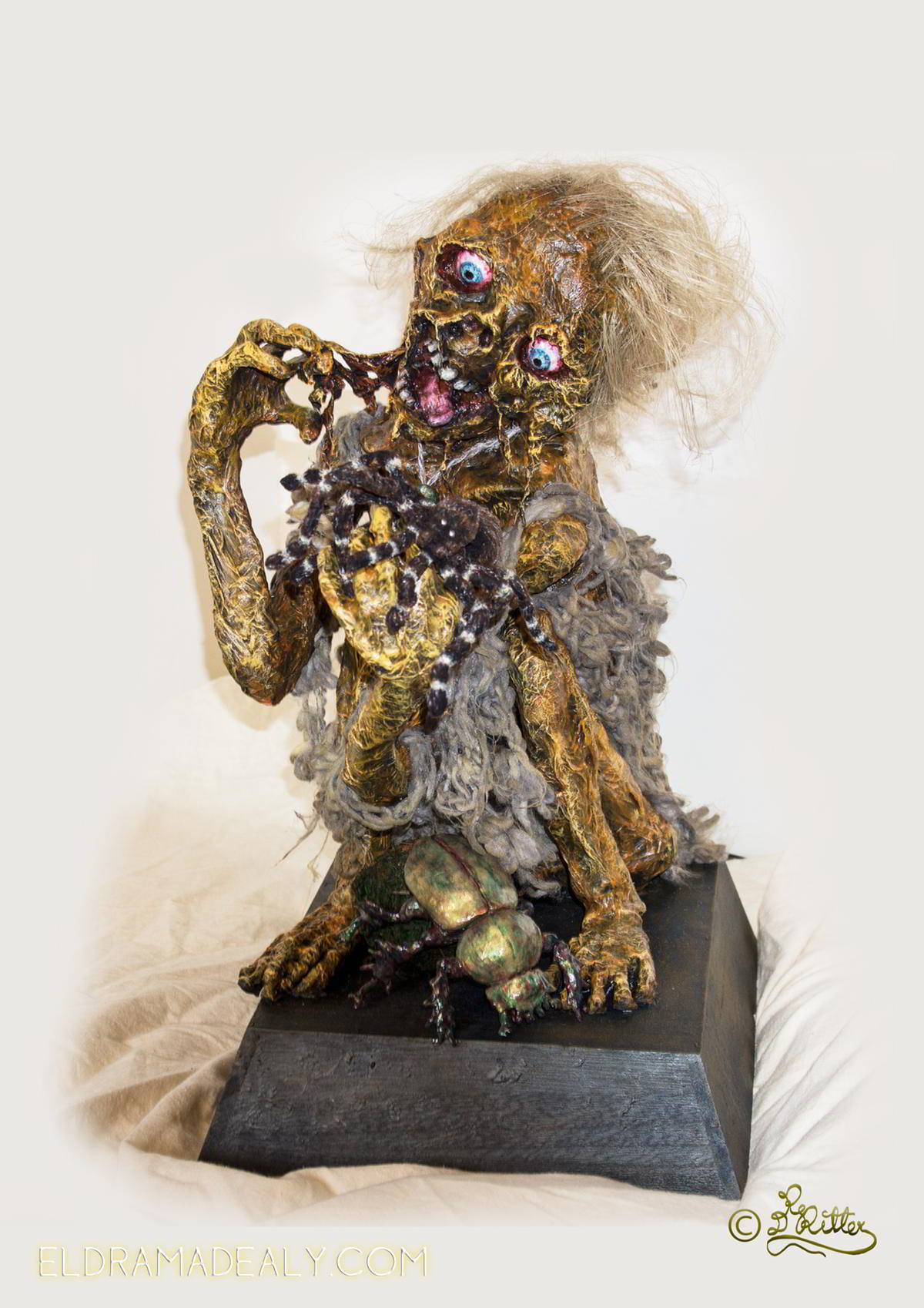 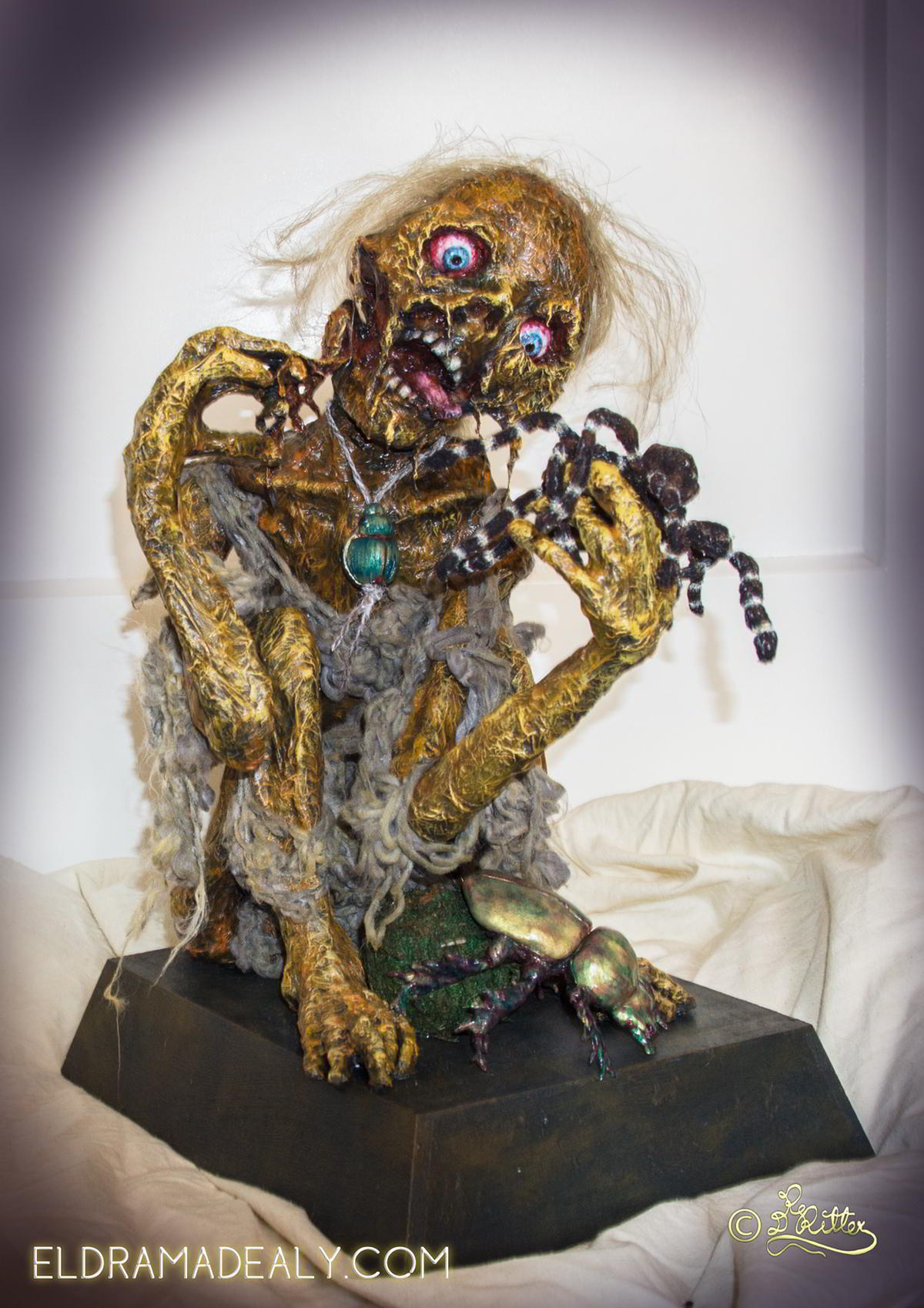 Genetics is a very interesting science. On the one hand, it can do so many helpful things, for example finding a way to build a new organ for transplantats to ill people's body, or prevent diseases, and much, much more. But on the other hand, it gives the tools to some scientist to make inhuman experiments by cloning animals and human beings! This sick idea of a perfect humanity is an old mean dream of very strange persons. Only picking out the word "perfect" and asking, "perfect in whose eyes?" shows the danger of such scientific experiments!

There are laws in many countries that for example forbid experiments on human embryos older than three months. After that age, they have to be destroyed. But we all know that law and the real life are two pairs of shoes! And I'm sure that there are strange forbidden experiments made all over the world. Naturally not as dramatic as it's shown in horror- and science fiction- films. But I can't get rid of the thought, what may go on in the mind of such cloned creature, if it would exist by now, and could feel and think, living in captivity as guinea pig?!

So "Genja" is my idea of a creature half-human, half-animal. She can think and feel! She may look strange, but also sweet and it touches my heart to see this friendly person, being forced to live with such heavy physical deformations, only because of insane scientists!

You now may say, this creature came only out of your imagination and your fear of what can be made with genetics! You are right, but she makes me think critically about that topic and not only seeing the improving factors for medical treatments! Also, I want to make other people look at the dark, dirty and dangerous sides of scientific progresses, sponsored with the money of a group of persons that is dreaming of a new society, as they plan it. And as silly as that sounds, this people already existed as history shows us, and such mentally ill persons also exist nowadays, with very powerful tools to make their vision come true. This frightens me really and I hope that they will never succeed!!! So, we should focus our eyes on such hidden movement, without falling into a fever of conspiracy theories! 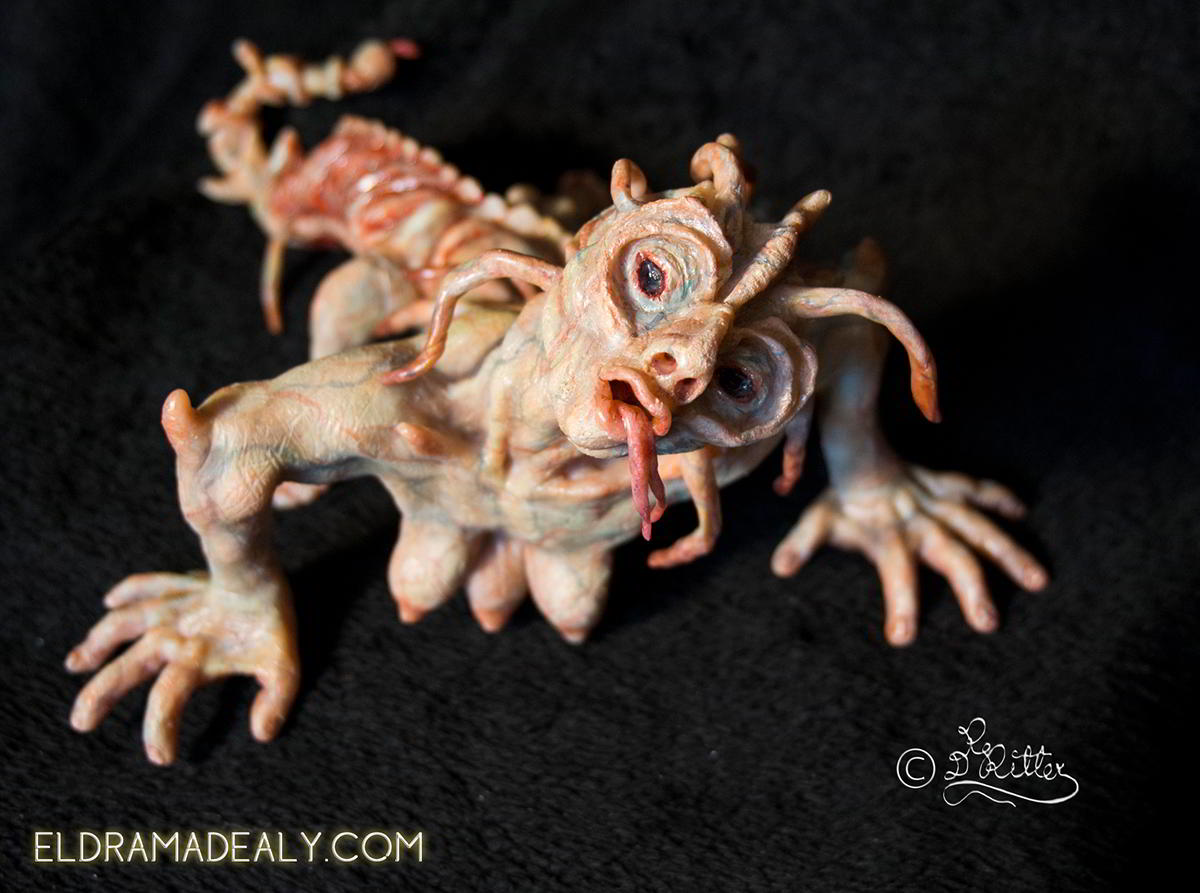 Once I had a ceramic sculpture of a white rabbit with a silk hat on his head and dark tailcoat and trousers! It always reminds me of the White Rabbit of “Alice In Wonderland”. I was so sorry when it accidentally broke, that from then on, I was obsessed by the wish to get a new one! You guess what´s coming now! I didn't find a similar one, so, I took the challenge and created an idea for a new one, but not as friendly as the old one looked like. No, that wouldn't be me. Business as usual, I did it my way! Voila, here he comes: Sir Bunny, The Chicken Killer! 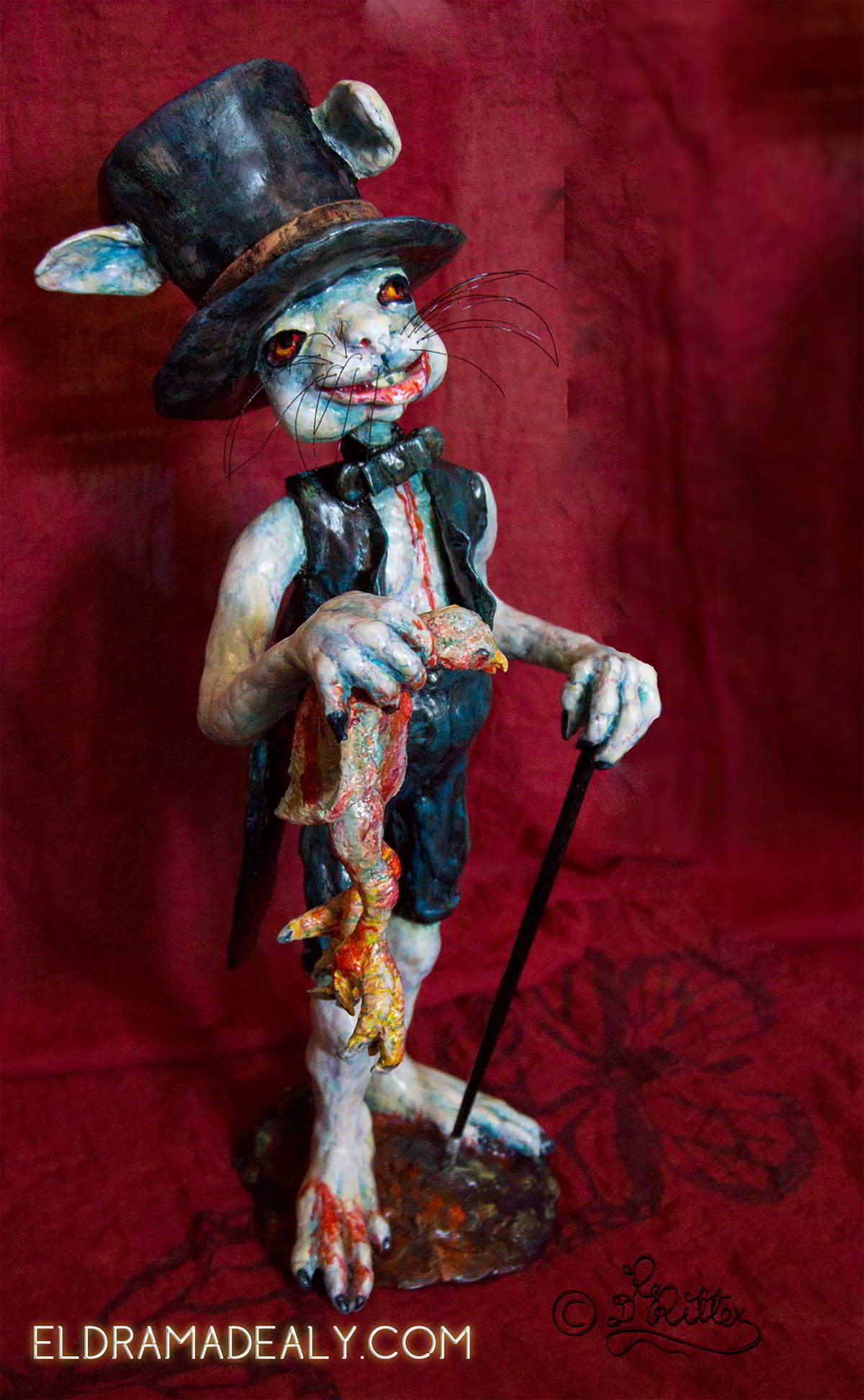 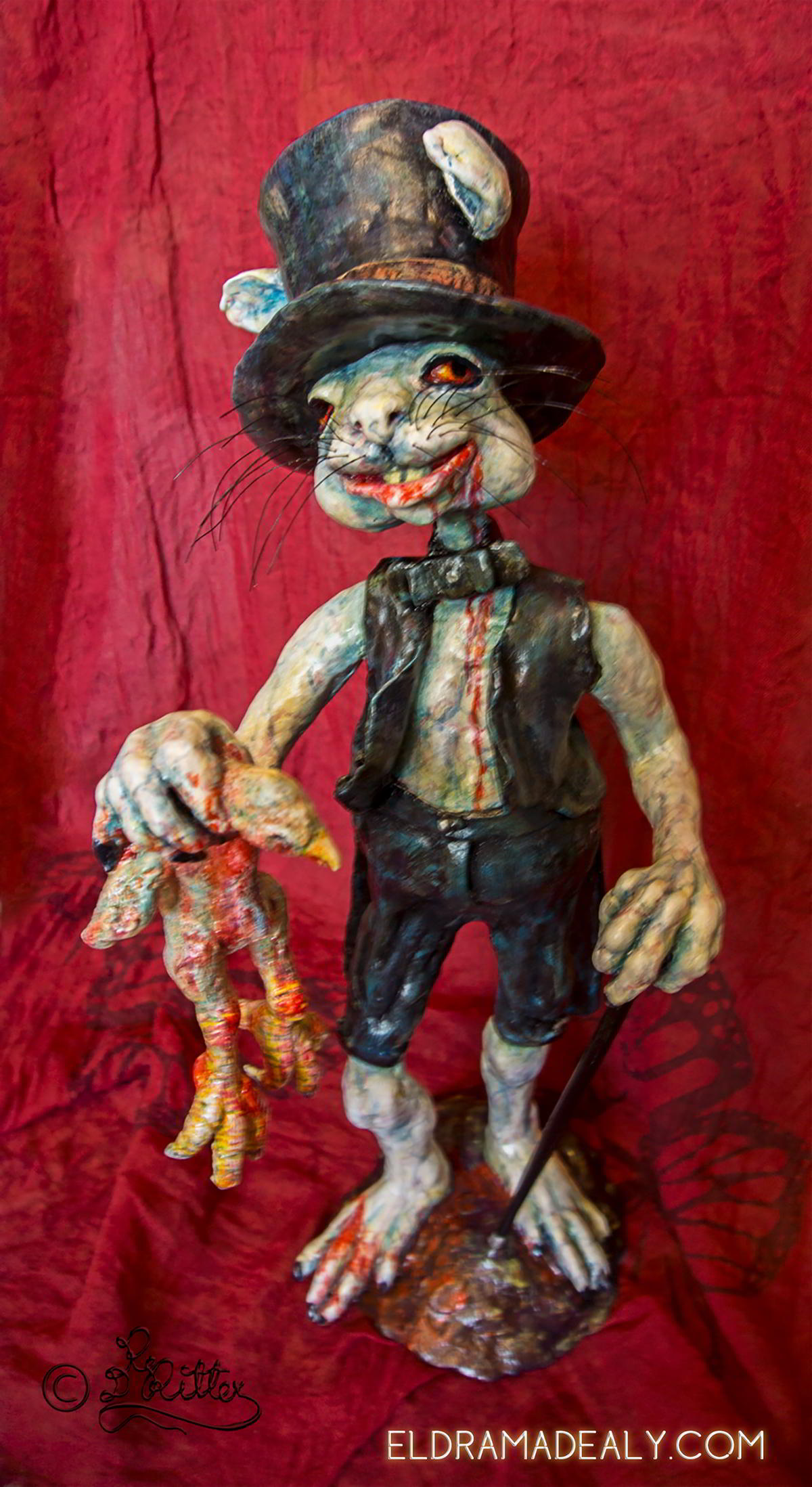 The story of the making of sculpture is a little bit strange. If you have read some of my other explanations before, you will now think: “Business as usual.”
It all started with my passion for dark and Gothic home decoration. I always have a whole year deko, mostly done by myself and naturally a Gothic -Christmas tree. But I didn't have a goth easter-styling for my home. You can't buy that in my home country and even ordering by internet is not really possible, because there is not much stuff of that kind for easter! So, I made some handcrafts only to fulfill my wish for these special products!

My brother-in-law liked my deko so much that he was afraid it could break, when I used normal (empty) chicken eggs, that he gave me some artificial eggs as a basis for my handcrafts, in order to make them more robust! So, I made many, many deko eggs and really got bored by that work. That brought me to the idea to make a special egg-headed sculpture, by using an artificial egg as sculpture skeleton.

This was when “Bone Winged Egghead” came to life! And now, this guy is hanging around at my place the whole year and not only during the easter holidays! 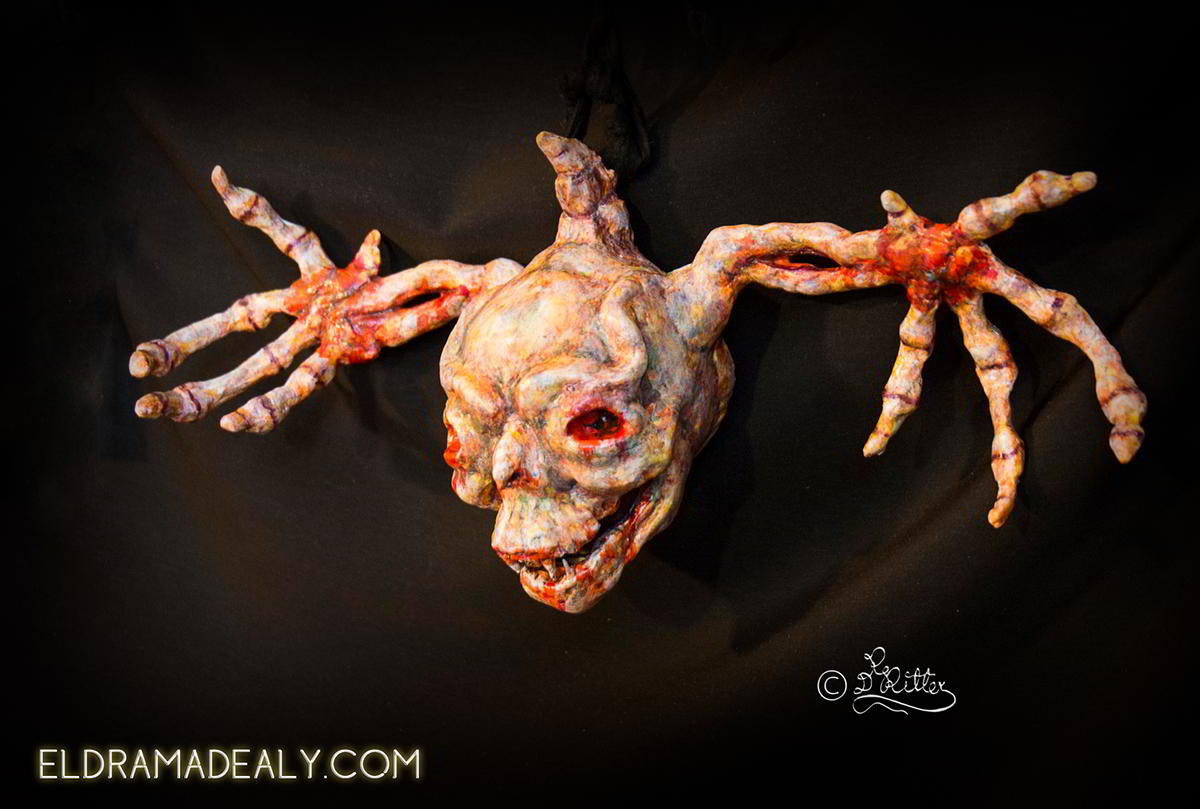 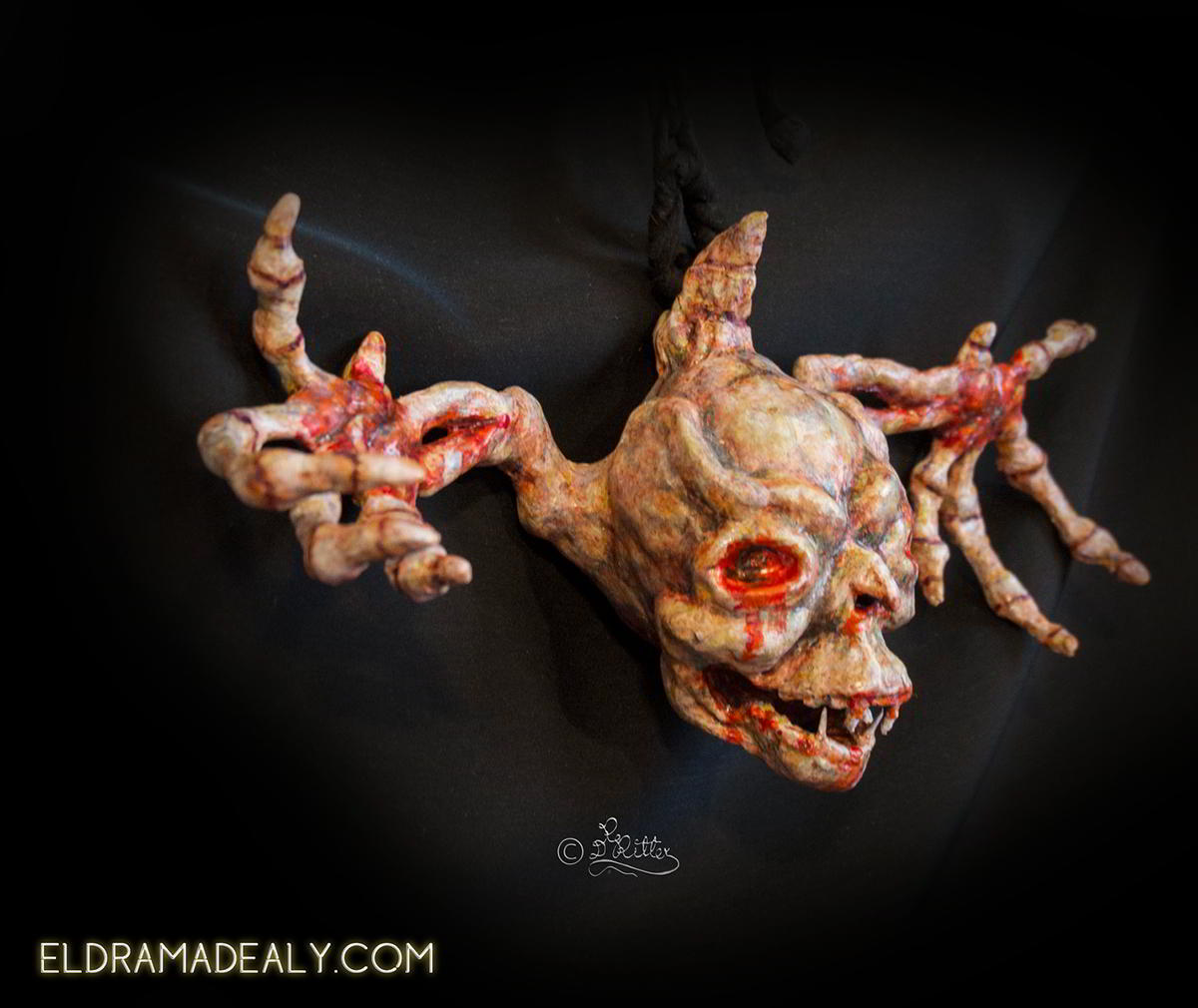 I love my Gothic styled home. Crazy artists you may think. But it makes me feel good and brings me into the mood for my “Dark Art” work. When you get up in the morning, don't you plan your day, what your work will be focused on, or even with what you will enjoy in your spare time?

And where do we all start our day? In the bathroom! Nearly everyone, I think, has a mirror in his or her bathroom! Guess which mirror is hanging in mine? the one made by my little chuppy hands! 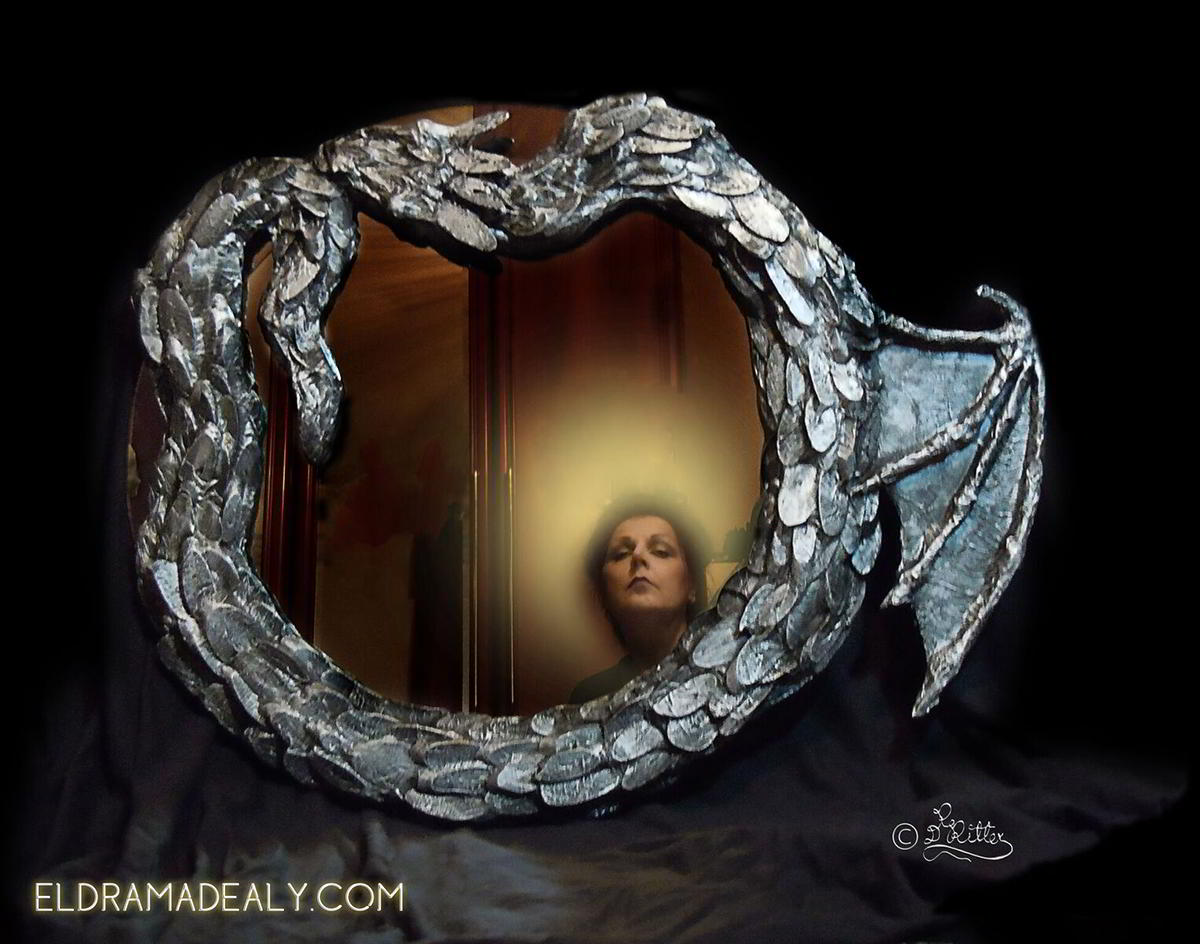 Find these, and many other crafts designed and made by Dagmar R Ritter here: www.darkness.bplaced.net/