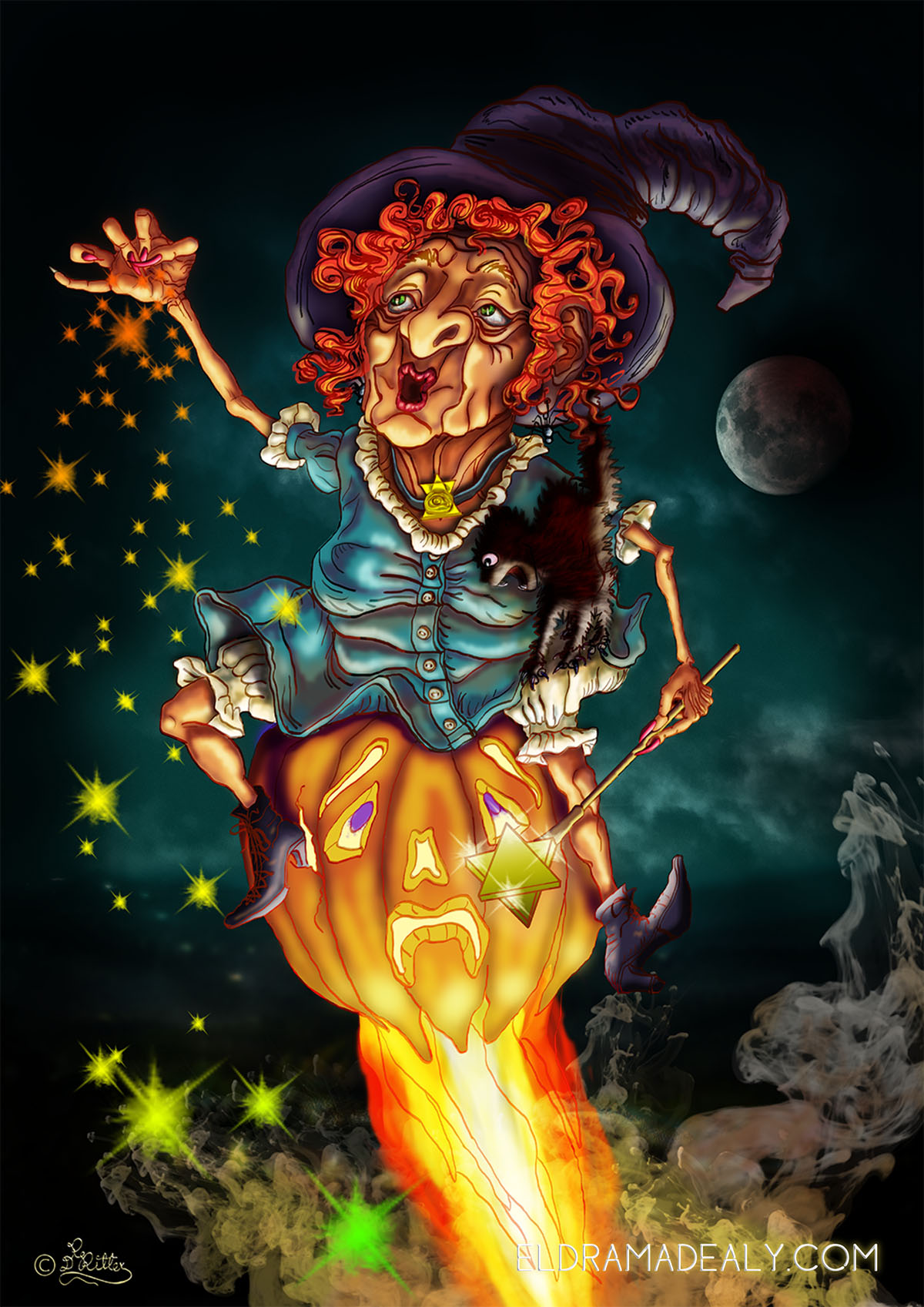 As a Dark-Art artist, it is a pleasure for me, that Halloween is also more and more celebrated in my home country! So this is one more illustration of my Halloween series!

This friendly elderly Lady is traveling on her turbo-pumpkin throwing her good and funny spells town to earth. Only the pumpkin itself and the little black cat seem to be a bit unhappy and frighten by her fast style of moving! But the witch is so enthusiastic in her task, that she doesn't notice how uncomfortable her fellow travelers are!

The Evil Appears in any Form! 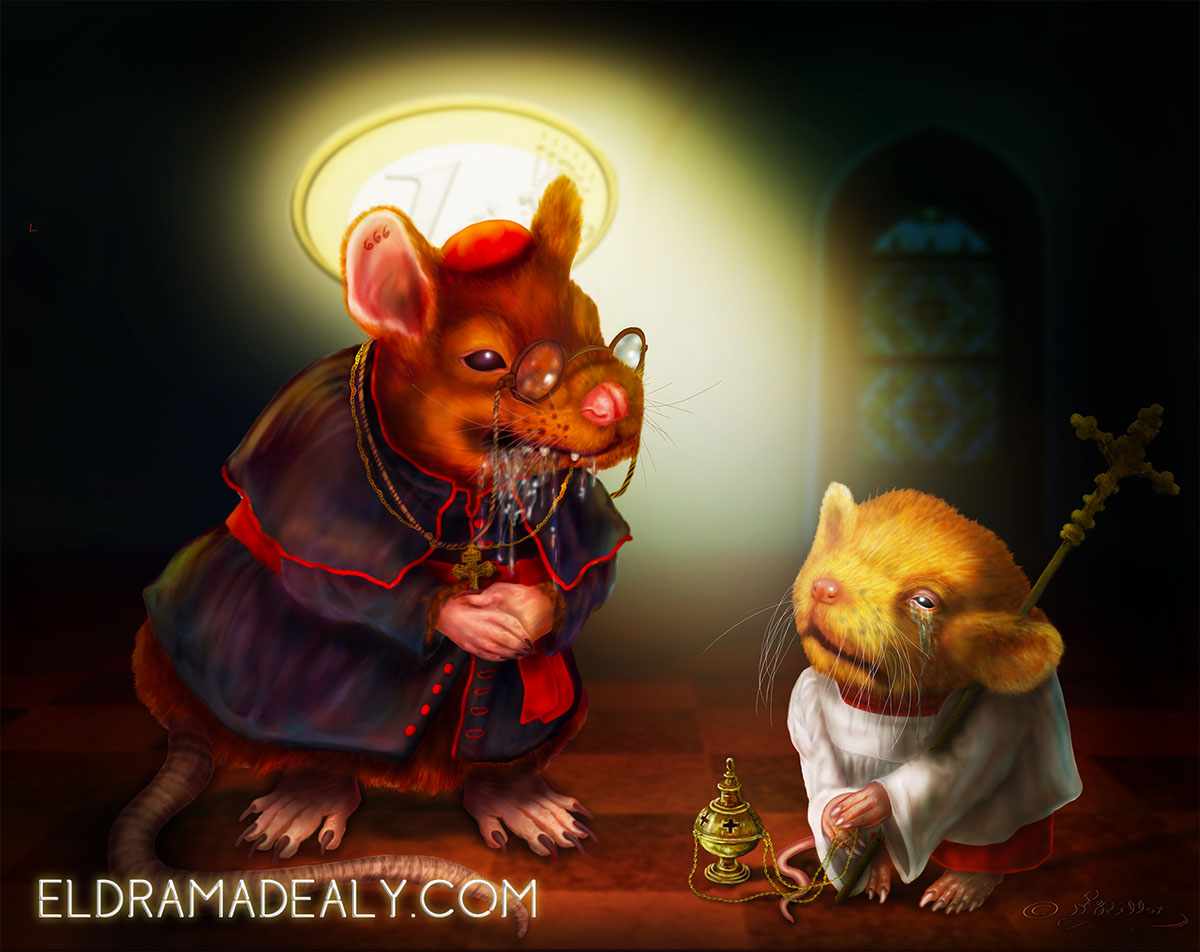 Although I'm an atheist, I accept any religion as log, as it is open minded and tolerant to people who have a different belief or no religion at all!

Mostly, the basic idea of any religion includes this acceptance. Only the institutions, or better said a group of people, who represent this religion are using it for their own purposes.

Groups of extremists always existed and still exist in nearly every religion. I'm sorry for thinking negative: I'm sure they will exist in future too!

Some beholders think I wanted to point out the negative parts of the Catholic church. But this is just an example for many evil things people do in the name of God! Their God wouldn't accept that! So they are a shame for the really good idea of their religion.

The reason why I took the Catholic church example is, that I've grown up in a county with a Christian tradition. So I know exactly from what I'm speaking of! I would never presume to talk about a religion in detail, with which I am not as familiar as the catholic church.

But this should not be only to point out the worse cases, no, it should rather be seen as hope, that these people who have a deep believe in the positive meaning, stop to accept that these black sheep throw dirt on their religious conviction! There is always the hope for a change to a better world! 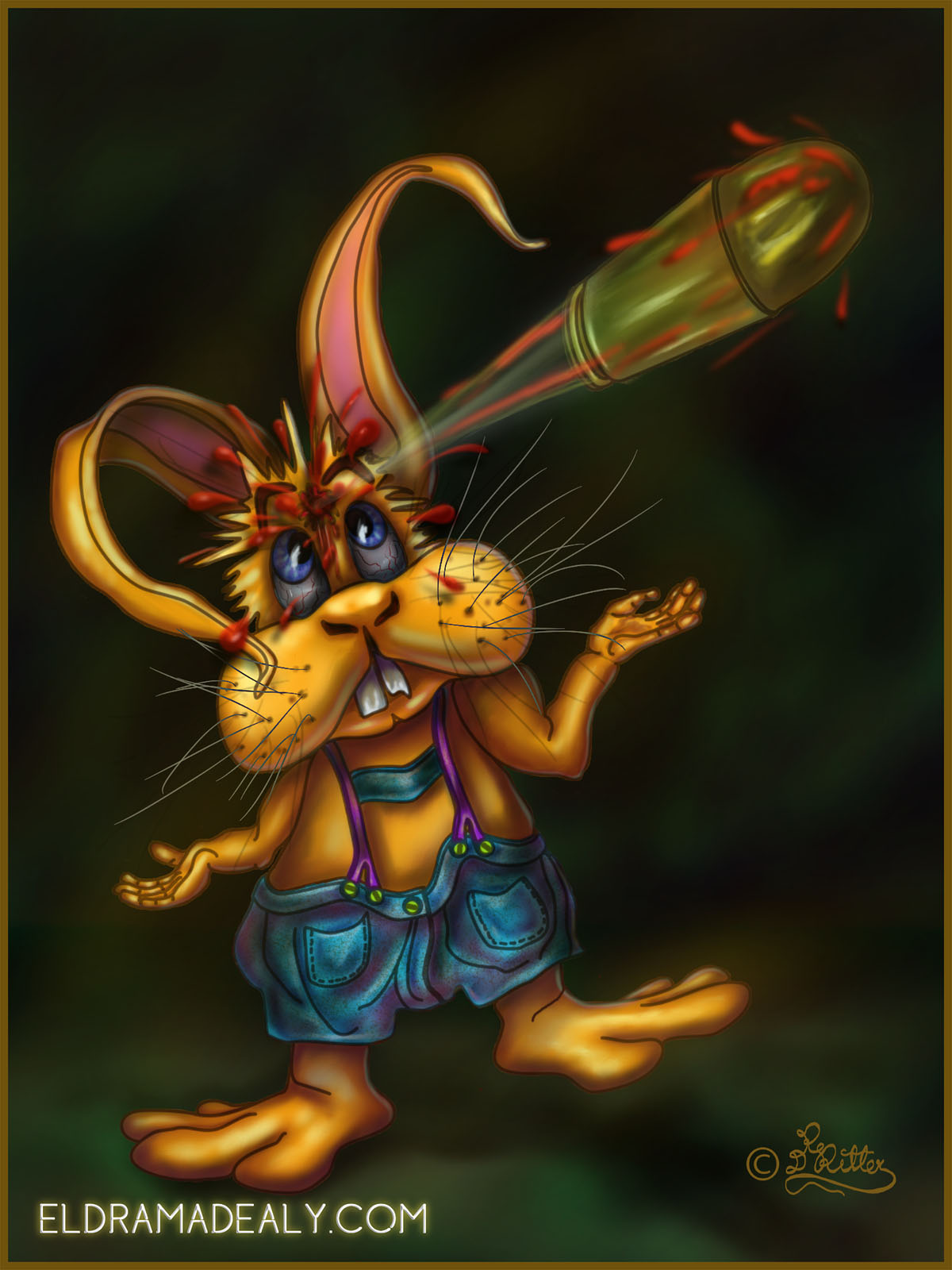 It's a more cynical way to express my feeling, that in some kind of social environment, you need not be head shot to stand it, but it makes it obviously easier! And much easier if you even don't know that you are headshoted.

That may work for some people over a long time. But if they lose their ignorance, wake up and see the whole reality, they are so shocked about the whole system and how they could not recognize it maybe for years, it could lead them into an out burn syndrome or a heavy crunch! 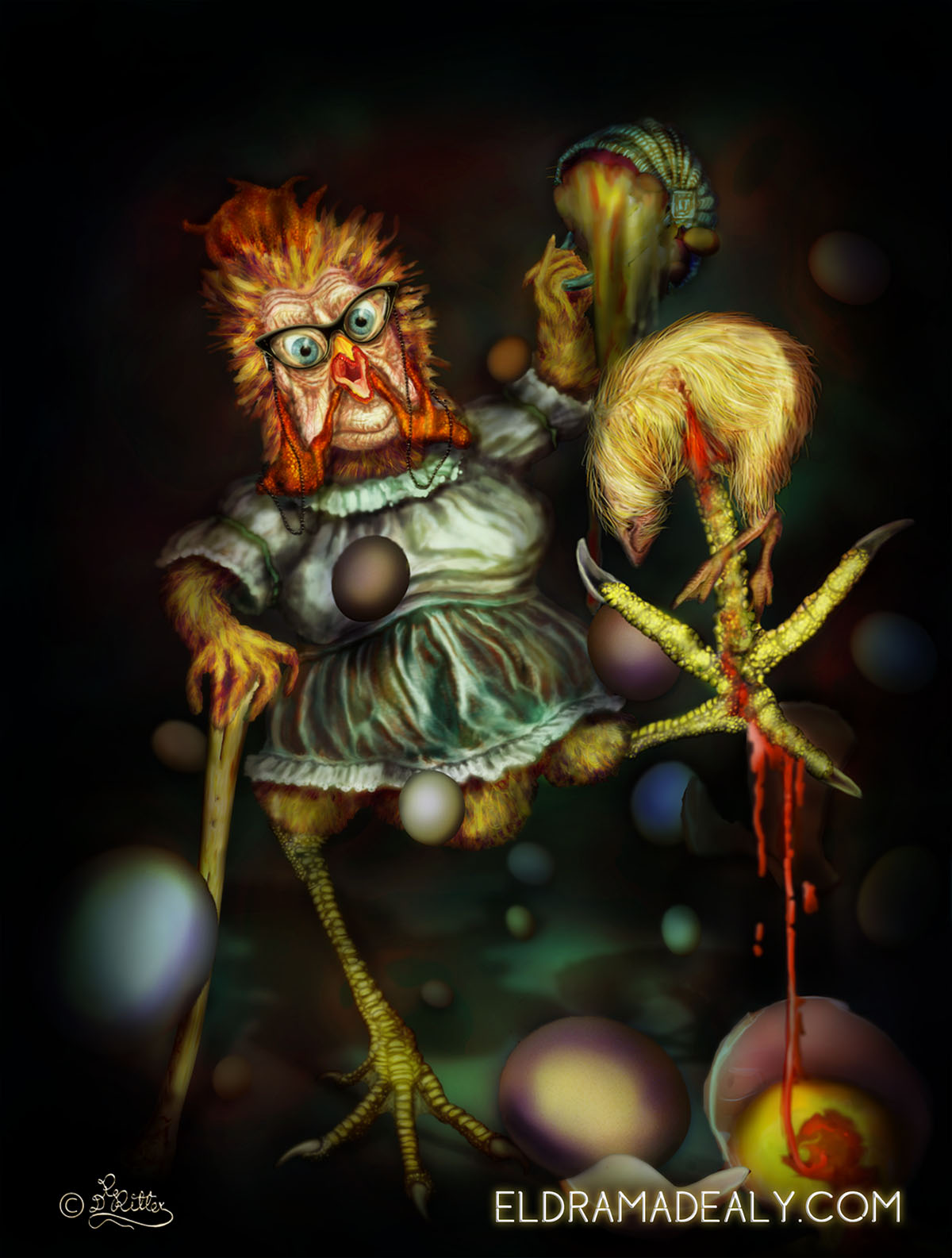 Easter eggs can look very beautiful. You need not come from a Christian tradition to like this artistic form of eggs!

This illustration may look dark and funny, and you may smile about it. But these crazy chickens exist in reality in battery farms! Created by the inhuman avarice for profit by the so called crown of creation! 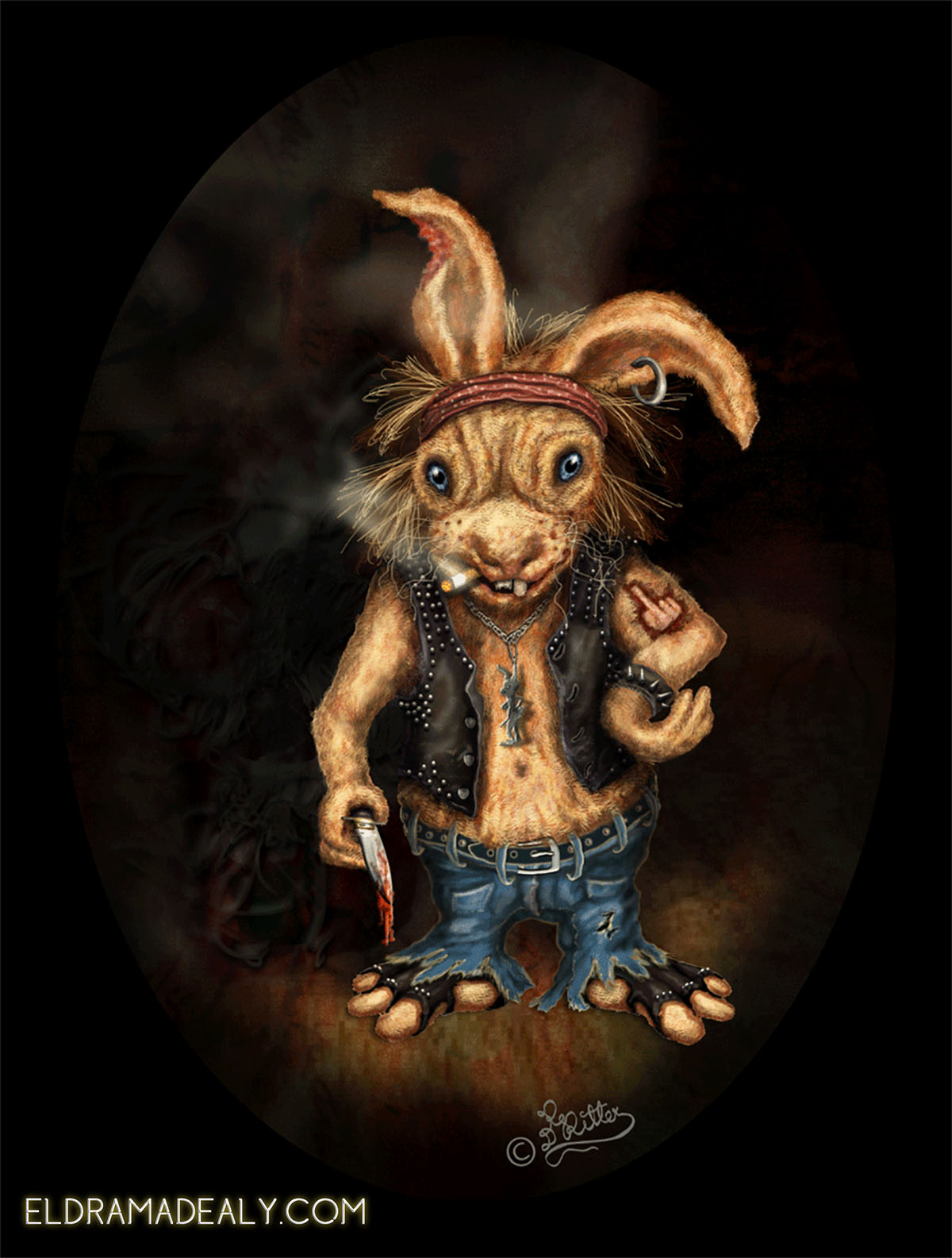 I must admit, I have a special close relationship to this funny guy. Maybe because he is in some kinds like me! He tries to look cool but deep in his heart he is a soft and nice rabbit!

People who don't know me personal, often believe that a Dark Art artist is something like a Satanist, evil and brutal. But I´m not! I don't want to cooperate with Satanist, fascists and other brutal person. I just like dark images, stories music and all that Gothic stuff. Other than that, I'm a complete harmless open minded person and a big, big animal lover.

A glance of a dog makes me melt like butter in the sun, in a second! 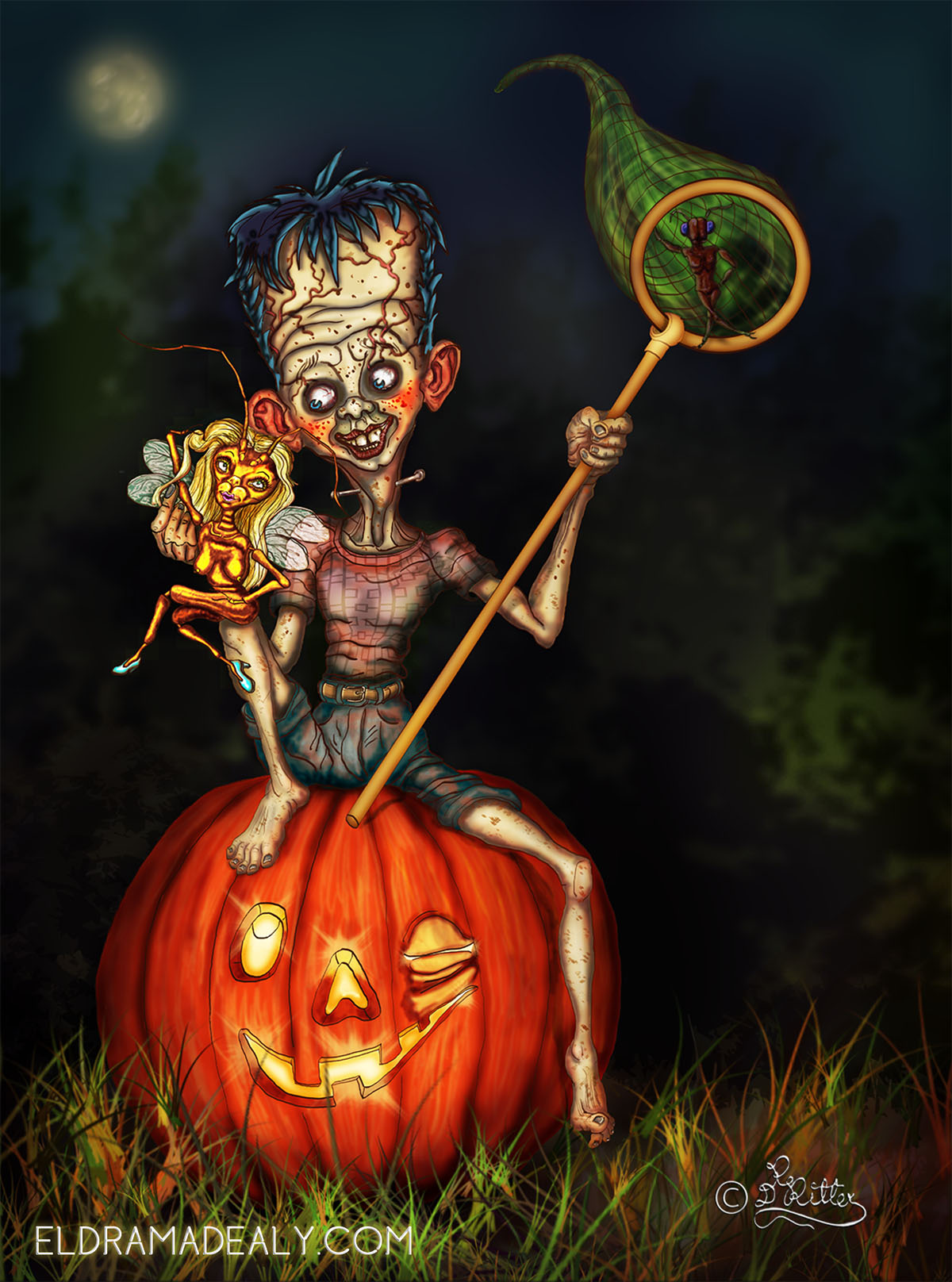 This is just a little funny illustration for Halloween. It shows a teenage Frankenstein, being attracted by the female beauty of an elf he caught, and watching her shamefaced!